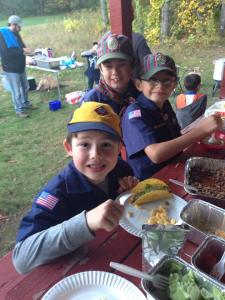 Demonstrating know how that would make anyone drool, scouts from Pack 610 served up a banquet of delight on Sunday afternoon. The tables groaned under the weight of beef stew, tacos, hot dogs, from scratch mac ‘n cheese, “steamers” complete with drawn butter, peach cobbler, and more. Everyone (Tigers, Wolves, Bears, Webelos I and Webelos II) lent a hand to the effort. From slicing potatoes for stew to steaming hot dogs to perfection scouts were engaged in every aspect of the project. Especially prominent were Dutch Ovens.

At stake: bragging rights and laying claim to the pack’s official Boy Scout dutch oven. As many will recall, our pack had a pizza challenge in the spring were each den baked a pizza in a dutch oven. The winning den, our rising Bears, won the day and returned on Sunday to defend their championship.

Honestly, it’s going to be tough. The Pack Committee has it’s work cut out as the members contemplate their vote. Hmmm, maybe it will be a five way tie and we’ll have to have a tie breaker! (Just kidding! The boys won’t stand for it. News of the judges decision will be made soon. Look for an update to this post in the next week.)